Nature provides us with many biodegradable and biocompatible materials waiting for their discovery, for example spider silk. The spider silk woven in large quantities can be as tough as steel, but also as flexible as a guitar string.

Although spider silk is useful for many applications, it is hard to produce silk in a large scale. Collecting spiders from nature or milking silk from a farm of spiders is inefficient because each spider can only make a small amount of silk—not enough for one dress.

To overcome the problem of spider silk production, researchers have recently explored a new idea: using a marine photosynthetic bacterium as a biofactory (Foong et al. 2020). This study will open a new door to produce materials in environmentally friendly and sustainable ways that could become a future trend.

What is Spider Silk?

Spider silk is composed of protein fibers secreted by glands in the abdominal (or rear) part of spiders. The raw material of silk is a liquid protein that passes through the spinnerets (silk-spinning organs). It becomes dry as it comes out from the abdomen of the spider’s body, and forms a thread.

If you want to learn more details about spider silk, watch this video below:

Spider silk has an impressive combination of high strength (breaking stress) and extensibility (breaking strain), resulting in its superior toughness. It also has exceptional flexibility. In addition, it can focus light and shrink in response to humidity. 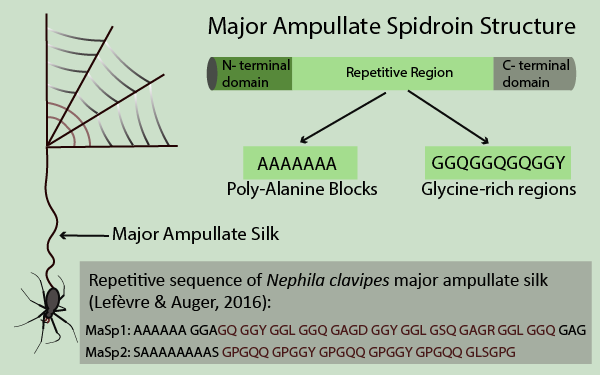 Major Ampullate Spidroin Structure.
The repetitive domains of major ampullate (dragline) silk consists of
alternating regions of polyalanine and glycine-rich sequences. These repetitive
domains are important for the strong and elastic features of the dragline silk
fibers (
Xu and Lewis,1990).

These special features of spider silk provide attractive
biomaterials for many potential applications in textile and biomedical
industries.

Types of Products from Spider Silk

For centuries, native people have collected spiders and used spider silk to make fishing lines, fishnets, headgear and bags. Despite the problem of producing silk in large quantities, the potential use of spider silk is still attractive to explore worldwide. Below are some examples of the applications:

In the textile industry, silk from the mulberry silkworm is widely popular. However, it has some disadvantages, such as wrinkling, susceptible to degradation, low wet resiliency, and UV-induced yellowing (Lefèvre & Auger, 2016).

In 2009, the American Museum of National History revealed an 11-by-4-foot tapestry made entirely from spider silk. This tapestry needed silk from more than one million spiders. It was a laborious project that took 70 people to collect the spiders, and four years to finish.

Due to its superior strength, spider silk could overcome some disadvantages of silkworm silk. However, textile production from spider silk will definitely need more efficient and economical techniques.

Silks are protein fibers containing crystalline and non-crystalline regions (Lin et al. 2020). Due to its transparency and ability to focus light, spider silk fibers are useful for some imaging applications, including creating superlenses for optical instruments. When researchers shine a laser onto the superlenses, they can observe miniscule structures (such as viruses, germs, or structures inside cells). Recently, researchers have successfully used spider silk to create superlenses and produce high-resolution images inside human body. In the future, there is a potential to use this technology to view how a virus infiltrates and causes damages in the cell.

Silk is sensitive to humidity. Spider dragline silk contracts and twists at the same time in response to moisture, providing a strong force. It is similar to the force that you apply when twisting something, such as a screwdriver.

One of the main spidroins in dragline silk, MaSp2, has proline that is crucial to the twisting reaction. The strength of this torsional force has convinced researchers that spider silk has a potential application for microactuators (or devices that can control or move a system), artificial muscles, and even biosensors.

How to Produce Spider Silk in a Large Scale

Though farming spiders for silk theoretically seems like a good idea, it caused big problems when implemented for initial spider silk production. Spiders are cannibalistic and territorial animals, so it’s tricky to rear and maintain them in large quantities. In captivity, they tend to produce less silk. It also takes a lot of time to harvest silk from spiders.

One way to produce silk proteins in large quantities is through the expression of natural spider silk genes in different host organisms, such as prokaryotes (such as Escherichia coli), eukaryotes, and even transgenic animals. However, using this approach can be expensive.

The cost of raw materials could easily add up during the production. Milking transgenic animals can be time-consuming. Another hurdle to overcome is the nature of repetitive spindroin sequences can reduce the production of a good quality silk.

Therefore, the next step is to find a way to produce spider silk on a large scale with eco-friendly, sustainable production processes, and low production costs.

In order to develop an environmentally-friendly factory for spider silk production, researchers looked a little closer at a purple-colored marine bacterium (Rhodovulum sulfidophilum) (Foong et al. 2020). The reason why the researchers chose this microorganism as a biofactory is because it only requires seawater, a source of sunlight, carbon dioxide, and nitrogen to survive. Unlike E. coli that needs special growth medium to grow, this purple marine bacterium can use sterilized seawater for its culture medium.

To investigate if this marine microorganism could produce quality spider silk, researchers performed a study to synthesize MaSp1 (one of the main dragline silk spidroins).

Researchers introduced the plasmid carrying MaSp1 gene into the purple non-sulfur bacterium, then they confirmed the expression of MaSp1 protein. For the large-scale production, they chose the largest repeat of MaSp1 and harvested a good amount of intact silk. This study in the marine purple bacterium showed a promising preliminary result on using a microbial cell factory to produce a biomaterial, such as spider silk.

The findings of this study might one day pave the way for mass-produced spider silk, but the most important result from this study: It is possible for biofactories to adapt eco-friendly processes. In addition, perhaps, this study will inspire the development of products using more sustainable and renewable resources.